As I mentioned before, I am currently working on “my cloud” project… It is not typical cloud implementation – it is NOT business oriented, however it is useful for end users and it is not using single technology, however mix of technologies.

Not long time ago both my computers crashed (I use Windows 7 64b on both of them) – I could simply reinstall both of them without hassling with backups and then just let them join the cloud and they will download everything from cloud.

Well, crashed… They simply started to act really strange. Syndroms (some of them at least) are below:

Taskbar was completely corrupted – new applications were not displayed, live preview didn’t work etc. Notice the stacked icons on right – every new application looked like this:

I wanted to troubleshoot little bit – ouch, task manager was not displaying any information: 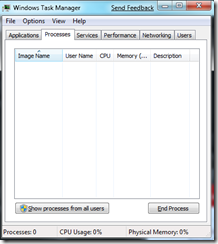 All my Live Mesh folders were not accessible – and icons overlay was gone:

Messenger didn’t work – it will get stuck on connecting, however it will never connect… Also start menu didn’t work at all – I could open it, however could click on any icons and indexing didn’t work.

Looks like pretty bad situation, heh? That was my desktop – on my laptop situation was much better, only few apps like Live Messenger won’t work. As I said, it was my development\experimental desktop, so I thought that it was one of my experiments that broke it.

So I reinstalled it (again with 64bit Windows 7) and installed only software I really use – Skype, Gizmo, Live Mesh, Office… Nothing special. It worked for few days – and same syndroms appeared.

So it was obvious something is really wrong. I tried to create new account and for that account it worked – but my Live Mesh folders were not available. I tried to uninstall Live Mesh – and after reboot everything works fine.

Because I didn’t have access to Programs & Features anymore, I used PowerShell to uninstall it:

After reboot everything was back to normal. Obviously there is some problem with integration to Explorer…

Anyone from Live Mesh team? ;)