Well, still lot of stuff to learn about MFCOM behavior :(

I already run into this issue few times and I wanted to clarify that Citrix XenApp 4.5 have same issue.

There are two different ways how to assign Load Evaluator using MFCOM.

First makes more sense to me:

Problem with this approach is that sometimes (= quite often) something goes wrong in MFCOM. If you ask MFCOM about assigned load evaluator, you get correct answer:

In this case True means that load evaluator assigned is SAME as requested (-LoadEvaluator).

When I try to manually double-check, everything looks fine:

If you however look in CMC, you see old load evaluator: 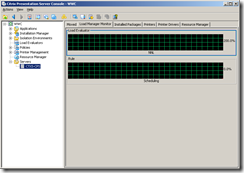 Hmmmmm, that is really strange. To make it even more confusing, lets select Load Evaluators in CMC: 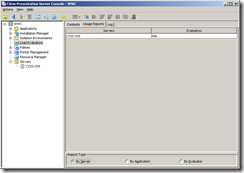 Now change view to report "By Evaluator" - here we go, our server have 2 Load Evaluators assigned :( 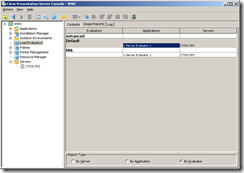 You can also use second method

I don't like this method, it doesn't sound that good to me - I want to assign Load Evaluator to server, not other way around.

Problem is that this method works :(

Hi Martin
This is a very cool script. Can you please post it on CDN Script exchange too? CDN script exchange is a wiki site where you can upload your samples and get more visibility.

Click here to learn how to upload samples on CDN

I already found CDN, however right now I am creating my repository of citrix related scripts - not only scripts themselves, but also custom enumerations ([MF.Color], [MF.Object] etc) and I will post them all at once.